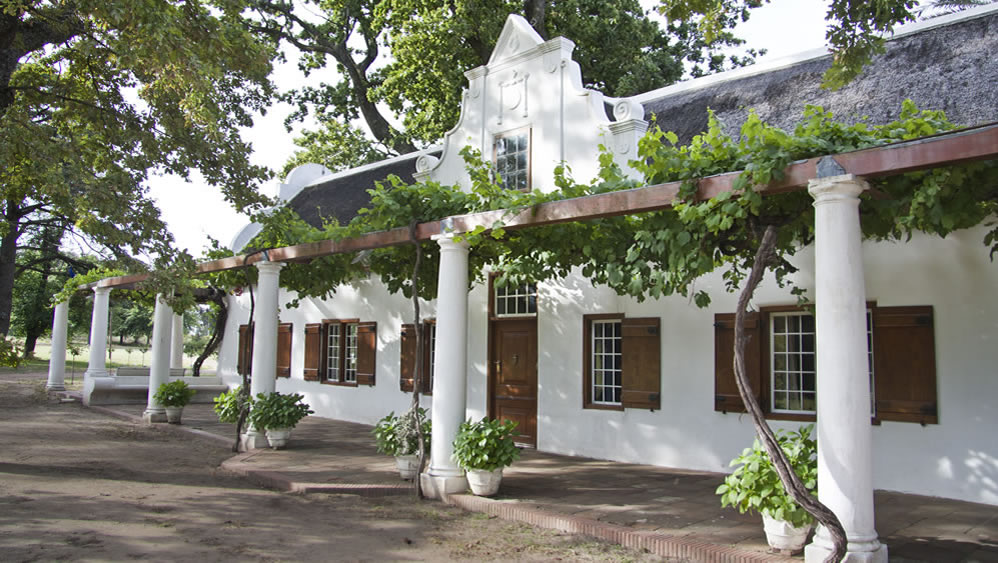 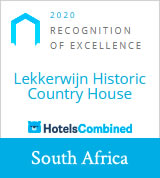 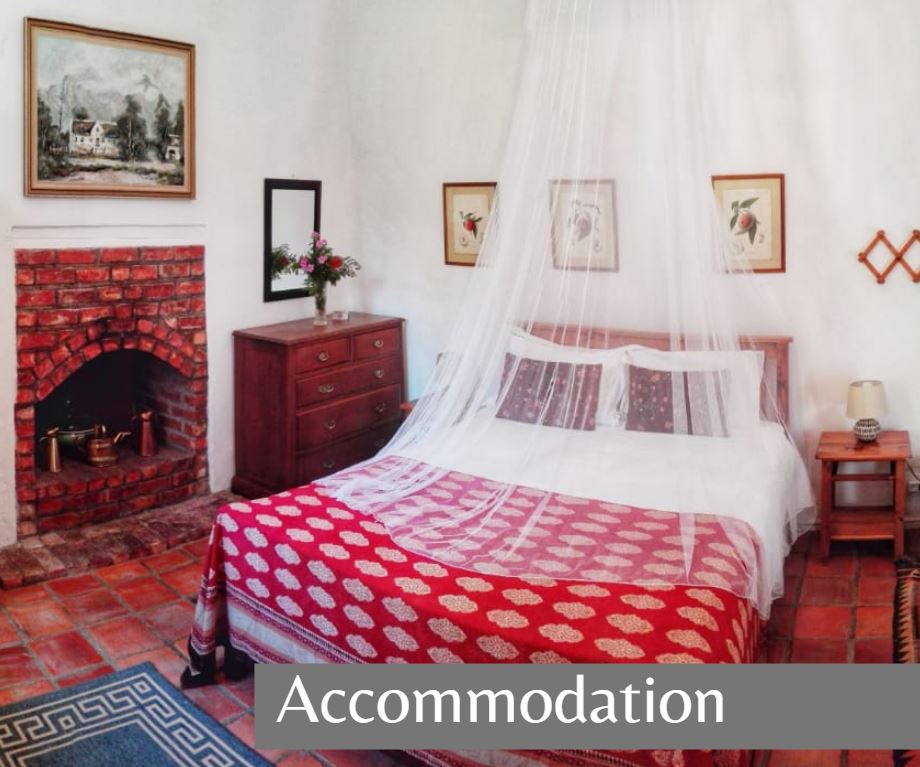 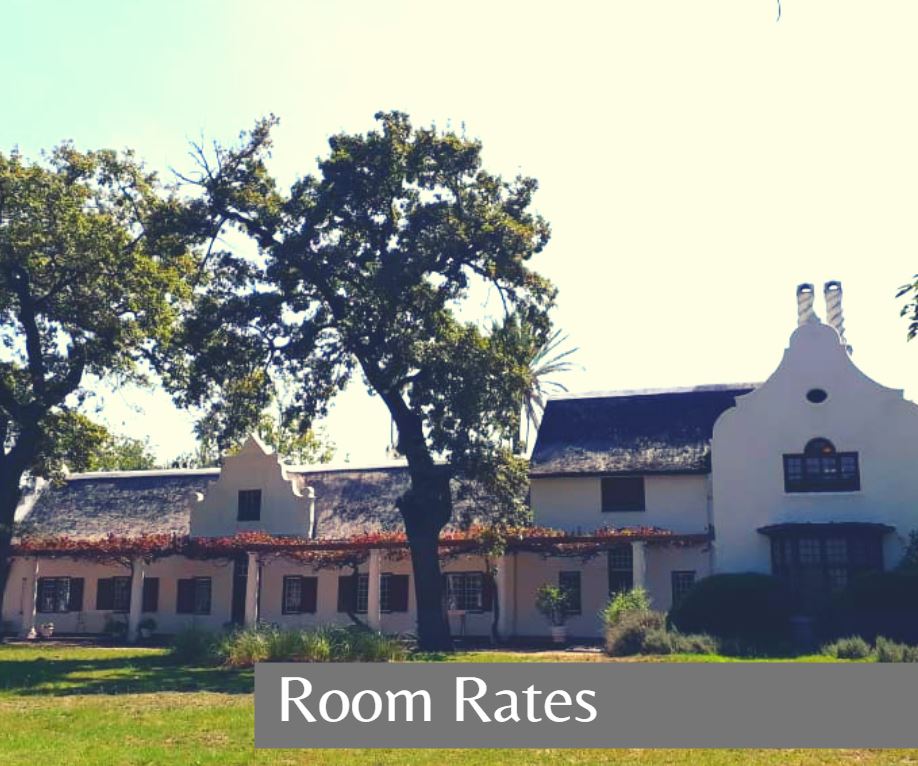 1690 25th October. French Huguenot Ari L’Ecrivant is granted the land by Simon van der Stel. The Dutch pronunciation of the French L’Ecrivant (meaning ‘the scribe’) makes it sound similar to the Dutch, Lekkerwijn. Ari’s ownership at Lekkerwijn is short lived. In van der Stel’s diary it is written that L’Ecrivant is murdered by his neighbour, Silberbach who then disappears from the records.

1880s The Cape Wine industry is nearly destroyed by the vine aphid Phylloxera. Cecil John Rhodes is determined to find an alternative to the grape industry.

1892 Rhodes buys Lekkerwijn and establishes HEV Pickstone in partnership with the Dutch farmer, Van Reenen and Lionel Baker (brother of the architect), whose capital is provided by his father owner of Owletts, Kent. Unfortunately, Van Reenen cannot understand Pickstone’s Californian methods and the partnership is dissolved and the farm abandoned.

1892 Herbert Baker is engaged by Cecil John Rhodes, the Premier of the Cape Colony, to transform Groote Schuur on the slopes of Table Mountain, into his official residence.

1895 HEV purchases Delta Farm in Groot Drakenstein and later Meerlust next to Delta and Lekkerwijn. His friend Herbert Baker advises on conservation of and changes to the buildings.

1886-97 Rhodes authorises purchases of some 29 farms from disillusioned and bankrupt farmers in Groot Drakenstein, Wellington and Tulbagh.

1898 All 29 farms owned by Mr Rhodes, amalgamated under the name of Rhodes Fruit Farms. HEV Pickstone is the founding General Manager and lived at Lekkerwijn.

1901 HEV negotiates the purchase of a homestead from Mr Rhodes. The original French Huguenot house L’Crévent is transferred to HEV Pickstone, the name changed to Lekkerwijn. It becomes his private residence.

1908 Aware of the health consequences of the damp problem at Lekkerwijn, HEV is determined to build a damp-free bedroom wing extension. Herbert Baker advises and his firm are commissioning architects.

Throughout the 20th, and continuing into the 21st Century, Lekkerwijn has been the family home to five generations of Pickstones, one of the Cape’s most prominent families.

HEV Pickstone is considered by many to be the father of the South African fruit industry. His vision, energy, hard work and influence developed a virtually non-existent industry into one of the key exporting industries of fresh, dried and canned fruit. Although the global fruit industry no longer drives the Valley or the Estate, HEV’s granddaughter and great-grandson continue to maintain the legacy and the properties that he left behind.

1884 HEV Pickstone enlists in Paul Methuen’s 1st Mounted Rifles. He arrives in Cape with 4,000 mounted troops to settle a border dispute between Paul Kruger and the Cape Colony.

1880s The Cape Wine industry is nearly destroyed by the vine aphid Phylloxera. Dutch farmers are close to bankruptcy and their old homesteads in need of care to prevent destruction. Meerlust, next door to lekkerwijn, is sold for a transport wagon and a pair of mules so the owner could seek his fortune providing transport to the new diamond mines at Kimberley.

1888 HEV Pickstone arrives in San Fransico, California. He shuns the gold rush to the north and begins working on fruit farms in Riverside and Santa Clara Valley, learning to set buds.

There, he sees Californians packing their produce into the refrigerated trans-continental rail trucks and sending them to the East coast markets. In his mind, East/West fresh produce is translated into North/South trade, i.e. growing fruit in the southern hemisphere and shipping it fresh and out-of-season to New York and London Markets.

1892 Herbert Baker is engaged by Cecil John Rhodes, premier of the Cape Colony, to transform Groote Schuur on the slopes of Table Mountain, into his official residence.

1895 On behalf of Rhodes, HEV purchases Delta Farm in Groot Drakenstein and later Meerlust, next to Delta and Lekkerwijn. His friend Herbert Baker advises on conservation of, and changes to, the buildings.

1886-97 Rhodes authorises purchases of 29 farms from disillusioned and bankrupt farmers in Groot Drakenstein, Wellington and Tulbagh.

1898 All 29 farms owned by Mr Rhodes are amalgamated under the Rhodes Fruit Farms name. HEV Pickstone living at Lekkerwijn is the founding general manager. He believes that the industry will not survive without the Dutch farmers. After the first five years, the Dutch farmers begin to adopt the new pruning methods, buoyed by HEV’s results.

1901 HEV negotiates the purchase of a homestead from Mr Rhodes, who agrees to sell Lekkerwijn to him, and it becomes his private residence.

1907 HEV Pickstone marries Louisa Hooff May, known affectionately as Mollie and a granddaughter of the Swellendam Barry family.

1937 Margaret and Wendy Pickstone were born to Michael Pickstone, who married the American, Joan McGeoghegan.

1947 Joan returns to South Africa with her two daughters.

The flag is an enduring memorial to the origin of the Huguenot people who developed the valley and the Elephants who originally created the well-trodden path between Franschhoek and Villiersdorp.

1687 In October, Simon van der Stel and 23 pioneers leaves Stellenbosch and ventures over Helshoogte (Hell’s Pass) into the valley that van der Stel names Drakenstein (dragon rock), after the great estate in Holland owned by Lord Mydrecht. Each pioneer claims around 50ha each along the banks of the Berg River and its tributaries.

1688 176 French Huguenot refugees (French Protestants fleeing religious persecution in France) arrive in the valley. As highly trained craftsmen and experienced farmers (especially wine making), the French are considered an unexpected asset to the success of the new colony. The French impact on the valley is reflected with the change of the name from Olifantshoek (or Elephant Corner) to Franschhoek or ‘ French Corner’.

1692 The influence of the Huguenots in the Cape of Good Hope in South Africa increases as their numbers rise to 201. As refugees, they fled with the bare necessities. On arrival in South Africa if they are skilled in agriculture they are provided with land, implements, seed and animal stock on the proviso that they reimburse the Dutch East India Company with the resulting produce.

1655-1700 The French vastly increase the capacity of the wine industry with the number of vine plants increasing from 100 in 1655 to over a million in 1700. As a result, many wine estates and families to this day retain their French names.

1850 The last of the legendary herds of elephants that roamed the mountains is seen leaving the valley.

1938 The Huguenot Memorial is constructed, funded by the French Government, to commemorate 250 years of Huguenots settlement in the Valley. The monument’s three arches symbolise the Holy Trinity with the Sun of Righteousness rising above them. The woman holds a bible in her right hand, while in her left is a broken chain that symbolises liberation from religious oppression.